The Taboola and Outbrain merger: A new player in the advertising game

The Taboola and Outbrain merger: A new player in the advertising game

Taboola and Outbrain, two major New York City-based rival advertising companies, announced on October 3, 2019, that they will merge and form a single company under the name of ‘Taboola’ to become a worthy competitor to the likes of Google, Facebook, and Amazon in the advertising game. In this article, we will be analyzing the merge through both sides of the coin: the possible benefits and the possible loses/negatives.

The two historically rival companies’ goal had always been to earn traffic for advertisers and help publishers maximize revenue from each visitor.

The Founder and CEO of Taboola, Adam Singolda for the merge:

“Over the past decade, I’ve admired Outbrain and the innovation that Yaron Galai, Ori Lahav and the rest of the Outbrain team have brought to the marketplace. By joining forces, we’ll be able to create a more robust competitor to Facebook and Google, giving advertisers a more meaningful choice… Working together, we will continue investing to better connect advertising dollars with local and national news organizations, strengthening journalism over the next decade. This is why we’re merging; this is our mission.”

According to Taboola, the newly formed company will now have reach in 50 countries in 23 offices, 2.6 billion people monthly through its 20,000 partners will be seeing their advertisements. Said partners include famous local and international brands such as CNBC, NBC News, USA TODAY, Sankei, Huffington Post, Microsoft, Business Insider, and The Independent.

The Benefits of the Merge

The official press release claims that the new company will offer:

According to Teicher, 2014, successful campaigns ultimately come down to trial and error. It’s harder to predict results when you can’t target audiences as specifically as you can on Facebook when publishing on platforms such as Taboola.

It is also accepted but is not such a common knowledge that Taboola can publish wrong facts to get more clicks – clickbait links – which is not as moral as one would expect from publishers since they do this at the expense of others. A great example of this is author Matt Logelin. Logelin’s wife passed away and they used this by presenting wrong facts for more clicks.

U.S. Democratic presidential candidate Elizabeth Warren has been questioning Facebook’s the new political advertising policies of Facebook, claiming without hard evidence that a change in the social media giant’s policy is most probably linked to a recent meeting between Facebook’s CEO, Mark Zuckerberg, and current President of the USA, Donald Trump.

Zuckerberg’s Facebook has been under pressure these past couple of years after results from U.S. intelligence services surfaced stating that Russia had used social media to interfere in the process of the U.S. Presidential elections in 2016. It

It should also be noted that Facebook has quietly changed the wording of its rules on political ads, which used to ban “deceptive, false or misleading content” to bans on “ads that include claims debunked by third-party fact-checkers or, in certain circumstances, claims debunked by organizations with particular expertise,” meaning that this change has excluded political ads and posts from Facebook’s fact-checking program.

Warren has called out Facebook for its new policy and has since asked for the break-up companies such as Amazon.com Inc., Alphabet Inc., and Facebook Inc. She has continually been arguing on Twitter that the public needs to know how Facebook intends to use its influence in the November 2020 presidential election. 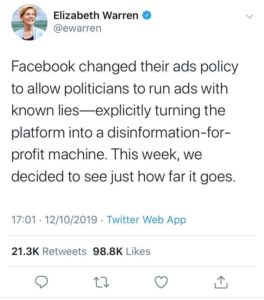 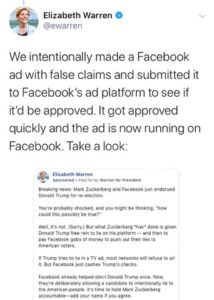 The most important question: What does Taboola have to do with all the above statements?

And the answer is quite clear: Zuckerberg has acknowledged that Warren is a threat to Facebook’s existence. One should acknowledge that perhaps it is not only Warren alone who will be the threat. If the market decides to lessen its publishing and advertising on Facebook, then it’s only reasonable that Facebook’s income through them will plummet.

That money, however, has to be spent elsewhere for economy and online marketing to not remain stagnant. Native advertising only seems likes the new reasonable option for advertisers and publishers to turn towards, of which Taboola and Engagya are some of them. With their 50-country wide range and the access they have on over 2 billion people, it is only to be expected that perhaps Facebook will only be replaced by a new superpower: Taboola.

While we have mentioned that Taboola is one of the candidates who might replace Facebook’s advertising, one cannot just ignore Engagya. While Engagya cannot be considered a “threat” to the so–called major players, all can accept that Engagya has been growing slowly but surely, steadily and thoroughly.

An aspect that was not mentioned previously is the geographic location of these companies and the effect of this factor on determining their clients. Taboola and Outbrain’s headquarters are in New York and Taboola’s new headquarters will again be located in New York, thus having an impact on mostly America and Western European countries. What happens to the Eastern, and most importantly the Mediterranean countries?

Yes! As one would expect, they are being supported by another company: Engagya.

Engagya has been having a huge impact lately, because of its superior technology. But that is not what we say, that is what the statistics say supporting Engagya’s superior technology and crowning this company as the “Leading Native Advertising Platform”:

As we previously said: yes, Facebook might be replaced by one big major superpower. However, one should not ignore the other obvious solution: many smaller companies coming up and shinning, which previously did not have the chance and even “stealing” from the obvious replacement companies’ precious clients that might prefer exclusivity over using a big name in their advertising. One should also not ignore that new companies being founded is also an option for the creative and brave individuals out there, which has happened countless of times before!

Before Taboola becomes a huge superpower and becoming a potential replacement for Facebook, the main question should be answered: does this merger need approval by the Israel Competition Authority, since they are both Israel founded companies, and if so, will regulatory obstacles arise?

Bein-Leibovitz (2019) clarifies some facts and requirements in ‘Will the regulator approve Taboola-Outbrain merger?’ for the merger to succeed. An excerpt from the said article is the following:

‘The Restrictive Trade Practices Law addresses a merger of companies for which one of the following conditions hold:

In this specific case, the two companies conduct most of their activity overseas, but the law also applies to companies with offices in Israel whose activity affects the local market. The Israel Competition Authority director-general therefore ostensibly has grounds for taking a position.’

What do you think of this merger? Is replacing one superpower (Facebook) worth bringing forward a new one to replace it (Taboola)? Or should this said power be spread through all smaller native advertising companies in order to safeguard the market?

Vrountas, T (2019) The Taboola & Outbrain Merger: What Does It Mean for Advertisers?, Instapage, viewed  17 October 2019. < https://instapage.com/blog/taboola-outbrain-merger?fbclid=IwAR0H5Oz5azVyAUI-b5qQsYzZQvNslblwvHEYfYE1gsaTgnvJC4wvhUBrRVs >.